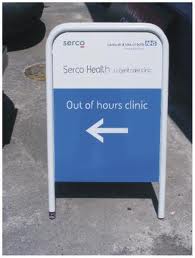 Exciting news about public sector outsourcing (well, it’s relative) draws me back to the blog . This time it’s Serco, fingered by the Guardian (EXCLUSIVELY!) for alleged misconduct in the performance of a contract to supply out of hours GP services in Cornwall.

The allegations include understaffing and excessive wait times for the patient helpline. There’s also this:

Among the most serious allegations being investigated by the CQC are that Serco management altered logs tracking response times and targets.

Computer logs, seen by the Guardian, of data-tracking calls to the service and response times measured daily and weekly against targets, show one set of figures at the end of 12 February for the number of calls meeting or failing to meet targets in various priority categories on 11 and 12 February. But different figures for the same dates appear in the log as displayed on 15 February.

The effect of the altered figures is to remove some of the “red” failed targets and make them “green” achieved targets, and to alter the percentage of targets met in other categories.

Sounds dodgy, right? This is Serco’s response as reported in the Guardian’s story:

Explaining the apparent discrepancy in figures, Serco said that it “audits all calls daily to understand areas in which issues are highlighted and where these may have fallen outside its control, including where a patient is deemed to have caused delay. Such cases are then reported to the PCT and changed accordingly on the internal management systems.” This enables the company to give the PCT two reports, one with figures that include “cases where patients have caused delays” and one without. This promotes greater transparency and does not constitute the wrongful alteration of data, it said.

Sadly for the Guardian’s EXCLUSIVE!, Serco’s explanation is absolutely correct. There is no scandal to these alterations, or at least not the scandal that is presented to us.

In any outsourcing contract the service provider will be obliged to perform in accordance with specified targets. In this case, those targets evidently include response times for calls requiring home attendance by medical staff, with the required response times being dependent on priority assigned to each call.

It is likely that the targets are in the form of “X% of calls in Category Y must be responded to within Time Z”. There may well be financial penalties for falling below this standard, for example by specifying a credit for each percentage point below X% over a given measurement period such as a day or a month.

Now, the fees charged by the service provider to the purchaser will be calculated on the basis of certain agreed inputs and assumptions. For a service performed using actual people (in this case, GPs and other medical staff), the most important input is likely to be the number of employees required to run the service in accordance with the required targets.

For a service of this nature, therefore, we would expect the service provider to either employ enough staff so that any foreseeable level of demand can be met, or to miss the performance targets with reasonable frequency.

The first of those options is expensive, and therefore unacceptable to the commissioning PCT. There is also a practical problem of finding enough medically qualified staff in the first place, and then retaining them when they end up playing cards for half their shift.

But the second option is unacceptable to potential service providers. Who wants to bid for a contract where there is every chance of losing money because of the frequency with which penalties must be paid? [You could charge a “risk premium” for this, but for the PCT that is commercially equivalent to option 1].

If the actual number of patients calling for a home visit during a specific period exceeds the assumed demand, however, the service provider is relieved from the obligation to meet the performance targets for that period. In the contracting jargon this is called a “relief event” (stop sniggering at the back).

In practice, the service provider can probably flex a bit by calling in some overtime from off duty staff, so there is usually a tolerance above the assumed demand where the targets still apply. The assumed demand may vary seasonally, or according to time of day, based on real world data about actual past demand.

The actual relief event cited by Serco in response to the Guardian’s story is “where a patient is deemed to have caused delay”, but in practice this is simply the other side of the assumed demand coin – if individual appointments take longer than expected, fewer can be managed by the same number of employees. It is therefore probable that an assumed appointment length is used in conjunction with the assumed demand.

So Serco is off the hook here – it was entirely legitimate for it to alter the performance record to take account of the relief events. The Guardian has perhaps made a category error, assuming that it was looking at a record of how the Cornwall PCT out of hours service was performing, rather than a record of how Serco was perfoming against the contractual requirements.

But this does illustrate something that I’ve written about before – contractual accountability is not the same as political, regulatory or management accountability. Serco can only be held accountable for its performance against the specified contractual requirements, and not for the success of the service in its widest sense.

You can see this at work in other elements of the Guardian’s story. For example, here is Serco’s reponse to the allegation that only a single GP was available to cover half the county on several occasions:

Serco employs a range of skills across Cornwall to meet patients’ needs and the PCT’s requirements. These include nurse practitioners, emergency care practitioners and GPs. It is typical to use a range of roles to provide out-of-hours services and there is no service requirement for Serco to supply all cars, clinics or the call centre solely with GPs. [my emphasis]

To be fair to the PCT, what this probably reflects is an attempt to align contractual requirements to service goals by specifying outputs (numbers of visits made) rather than inputs (number of GPs on shift). But it is a further illustration of the challenges of public sector outsourcing.

That means that the great article of faith of lawyers and consultants, that any outsourcing can be successful if the contract and commercial design is good enough, may not in practice be true in the public sector. Maybe there are just too many variables, so that even if the perfect contractual structure could be found nobody except its drafter would be able to understand it.

And maybe our politicians and our press and, frankly, ourselves are just too damn difficult to please.